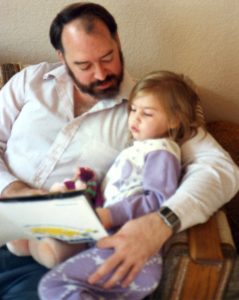 Nothing is so precious as the gift of reading. It’s something every parent should give their child. It costs nothing except our time, and there is no better investment in your child’s future.

Some parents wonder how, in their busy lives, they can fit in all the time required to read to a child. But it’s simple. Substitute books for television and computer games.

In our house, we often spent hours reading books each evening. There was no bedtime. If our daughter could stay awake while we read, we would keep reading. This made reading her favorite activity because it put her in control of bedtime.

Some parents wonder what level of book to read to their child. It’s often best to be guided by the child’s own selections.

Don’t assume that just because a child has started reading on their own they don’t still enjoy being read to. Children can enjoy books written on a much higher level than they can easily read themselves, so it’s wise to have a range of reading levels available. A general guideline is to look for books with characters about two years older than your child.

Even after my daughter started reading on her own, we continued the tradition of her lying in bed while I read to her.  In fact, this continued on, year after year. As the years passed, our reading material became a lot more sophisticated, but we never tired of the routine.

And then, one day, she found herself leaving for college!

What a lot of adventures we’d shared during those years that started with simple picture storybooks. I made a list and came up with a rough word count.

Here are the books (those I can remember, anyway) that we enjoyed over the years.

And many, many more.