Two of my novels are particularly useful in the classroom. This page provides suggested resources for developing study material to accompany both.

Resources for A Matter of Justice

A Matter of Justice takes place in the small town of Three Rivers, California. Its plot draws students in as they try to solve a mystery, but it also introduces Harper Lee’s To Kill a Mockingbird.  The book works particularly well in curricula also featuring that classic novel. It is accessible to readers in grade 6 and higher.

This map highlights the places Dani visits. Although the book reflects Three Rivers in 1968, most of these locations still exist, although the names of some have changed.

Here is an aerial view showing Trailer Isle and the Kaweah Post Office. Mott’s bridge is just a bit farther up the North Fork River:

Here are some online resources for researching topics mentioned in A Matter of Justice:

Resources for Everything In Its Path

This book is based upon an actual event, and most of the locations and people are real. It is recommended for grade 6 and higher.

Around midnight on the morning of March 13, 1928, the recently constructed St. Francis Dam gave way, releasing a 160-foot-high wall of water down San Francisquito Canyon.

For four hours the water thundered toward the Pacific Ocean, erasing nearly everything in its 50-mile path. It was the worst American civil engineering disaster of the twentieth century.

William Mulholland, the man who brought water to Los Angeles, was a superb self-taught engineer, but he was not a trained geologist. In designing the St. Francis dam he failed to recognize the layer of schist upon which the dam was constructed was actually the remnant of an ancient landslide, and was fundamentally unstable.

On the witness stand at the inquest he broke down and wept. “Don’t blame anybody else, you just fasten it on me,” he said. “If there is an error of human judgment, I was the human.”

Here are some online resources for researching topics mentioned in Everything In Its Path:

How to play Mah Jongg 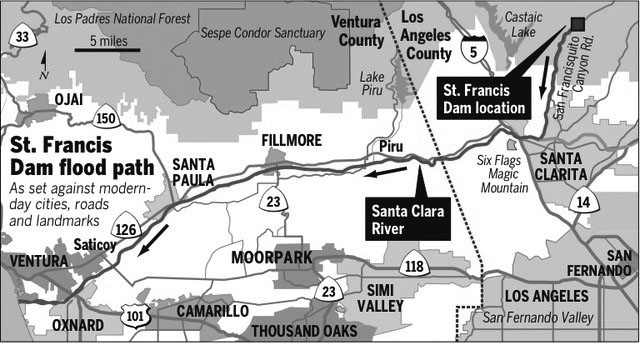